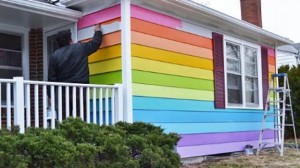 Planting Peace has acquired a house across the street from the Westboro Baptist Church and painted it in rainbow colors to protest the Church’s anti-homosexual stance. According to the Washington Post, Margie Phelps, second daughter of WBC founder Fred Phelps (and apparently the WBC’s legal counsel) called it “the sodomite house”, a clear reference to Genesis 17-19; the article also quotes her younger sister Shirley Phelps-Roper, spokesperson for the WBC, who in a bizarre case of reverse psychology claims to love the paint job because, and I paraphrase, it reminds people that God hates fags.

WBC founder Fred Phelps clearly hasn’t done a good job of raising his daughters, as they are showing no sign of performing their biblical duty, which according to Genesis 19 is to first offer themselves to said sodomites, and then date-rape their own father and bear his children.

Around one in the morning…

“This is blasphemous, you know.”

“This colostrum-based cold medicine. They have a promotion where they’ve hidden images of golden calves in some of the boxes and you win a prize if you find one. It’s blasphemous.”

“You know, the golden calf? The false idol the Israelites made while Moses was up on the mountain and he got so angry when he saw it that he broke the tablets and had to go back and get a new set?”

I stumbled upon the banana argument today. I don’t know whether to laugh or cry. A bit of both, I guess.

The earliest writings that are known to exist about the Prophet Mohammad were recorded 120 years after his death. All of the Islamic writings (the Koran and the Hadith, the biographies, the traditions and histories) are confused, contradictory and inconsistent. Maybe Mohammad never existed. We have no conclusive account about what he said or did. Yet Moslems follow the destructive teachings of Islam without question.

You could say the exact same thing about Jesus of Nazareth and the gospels. Muhammad’s existence is corroborated by contemporary non-Muslim sources and is just as much a historical fact as that of Jesus of Nazareth.

Islamic Law is totalitarian in nature. There is no separation of church and state. It is irrational. It is supposedly immutable and cannot be changed. It must be accepted without criticism.

The separation of church and state is a modern concept that dates back to the late eighteenth century. As for totalitarianism, irrationality and immutability: Have you actually read Exodus and Leviticus?

A Muslim does not have the right to change his religion. Apostasy is punishable by death.

Christianity is not known for its kind treatment of apostates and heretics.