As promised, here is my adaption of the second act of Beethoven‘s one and only opera Fidelio. Read the first act if you haven’t already. END_OF_DOCUMENT_TOKEN_TO_BE_REPLACED

I went to see a concert version of Fidelio at the Norwegian National Opera last night. For those of you who aren’t well versed in opera or in the classical or romantic eras of Western music, Fidelio is Beethoven‘s only opera; initially written in 1804 under the title Leonore, oder Der Triumph der ehelichen Liebe, it took ten years and numerous rewrites before it became what we know today as Fidelio. I know Fidelio quite well, having owned a copy of Karajan’s 1970 recording since my teens, but never really paid attention to the lyrics as a whole until I saw it on stage. I was mildly surprised at how progressive and (in places) possibly even scandalous they are, for their time. They deserve wider recognition. So without further ado, I present my abridged and somewhat… improved version of the libretto. END_OF_DOCUMENT_TOKEN_TO_BE_REPLACED

Back to Spektrum, but far better seats this time, and far better sound. We were seated about fifteen meters from the stage, close to the center, and had an unobstructed view of Jean-Michel Jarre and his band.

This was not my first Jarre concert, but it’s my first in a long while. Last time was the Oxygène 7-13 tour in 1997, which (I believe) was the first time Jarre dropped the outdoor format in favor of smaller, indoor concerts. Obviously, he focused on the newly released album, and played several of the tracks in sync with dizzying animations which played on huge screens over the stage.

This time was different. END_OF_DOCUMENT_TOKEN_TO_BE_REPLACED

Well, that was a waste of money.

K and I went to see Bob Dylan play at Oslo Spektrum tonight. In one word: atrocious. END_OF_DOCUMENT_TOKEN_TO_BE_REPLACED

Not exactly fresh, but I guess I needed a week or so to recover.

Saturday before last, K and I did something extremely out of character—not only did we go out (which rarely happens), not only did we go to a concert (I think the last time was Suzanne Vega in August of last year), but we went to see a band we’d never even heard of: Katzenjammer. 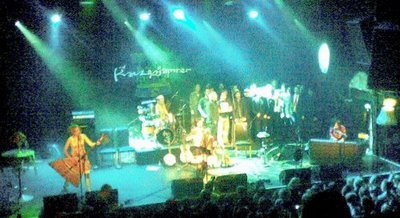