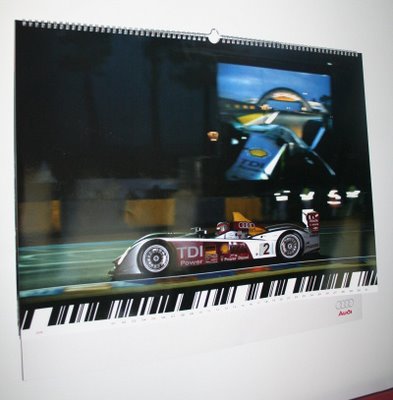 At the 2008 24 Heures du Mans, car #2 (an Audi R10 TDI run by Champion Racing under the Audi Sport North America brand) passes a screen that displays real-time video from a camera placed in its unoccupied right seat. I’m not positive, but from the helmet colors (silver with red stripes and yellow highlights), I think the driver is living legend Tom Kristensen. This car went on to win the race, while their #1 car ranked sixth and Audi Sport Team Joest‘s #3 car finished fourth.

The lighting was difficult—despite the flash, you can see patches of light from the window shining onto the calendar, which is printed on very shiny cardboard.