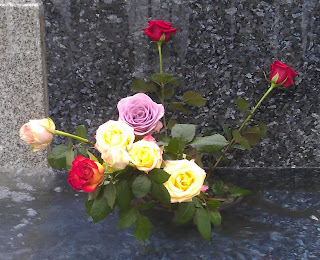 Today, there are no roses to be had in Oslo, for love nor money.

This is our finest hour.

I expect that many outside Norway will not understand, especially in countries which, when faced with similar actions, have answered hate with hate and violence with violence. But that is not the Norwegian way. Prime Minister Jens Stoltenberg said on Friday that “we are a small nation, we are a proud nation”. He should have added “we are a stubborn nation”. Anders Behring Breivik wants us to be scared. Therefore, we will not be scared.

As I look around from my spot by the fountain, waiting for the speeches to start, I note that there are no snipers on the roofs of the surrounding buildings. No armored cars. No police in riot gear. A police helicopter buzzes high above me. Crowd control has been delegated to security guards who are working pro bono.

While we wait, the crowd sings, alternating between the national anthem and Nordahl Grieg’s “Til Ungdommen”.

Their Royal Highnesses Crown Prince Haakon and Crown Princess Mette-Marit; Princess Märtha Louise; Prime Minister Jens Stoltenberg and his wife Ingrid Schulerud; around a third of the cabinet; Mayor Fabian Stang; leader of the Labor party’s youth organization and Utøya survivor Eskil Pedersen; former Prime Minister and “mother of the people” Gro Harlem Brundtland: these are some of the dignitaries attending this rose rally. Their Royal Highnesses and the Prime Minister are accompanied, I presume, by the usual half-dozen smartly dressed and highly trained young men and women. The others have no security detail whatsoever. What they have instead is, to paraphrase the late King Olav V, a hundred thousand bodyguards.

A few hours later, the crowd is dispersing quietly through the streets of Oslo, depositing their flowers here and there, covering fountains, statues, trees, fences… Many gather outside the cathedral, where several hundred square meters of pavement are already covered in flowers and candles.

Spontaneous applause breaks out wherever police, paramedics or firefighters appear. Mounted police ride slowly up Karl Johan, their harnesses festooned with roses given them by passers-by. On Egertorget, a young woman in a Red Cross uniform is sitting on a bench, crying, a rose in her hand. I work my way to the central fire station, where I offer mine to the firefighters who were the first to respond to the explosion.

I have never been more proud of my country and my city.