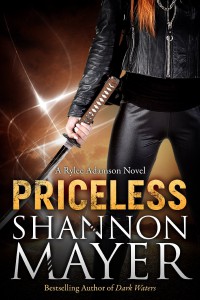 Rylee Adamson is a “Tracker”, a person with the supernatural ability to locate and telempathically connect to any person she knows or, apparently, of whom she’s seen a photograph (the Secret Service would be pretty worried if they knew). She has a dark past—of course!—which is hinted at but never explored except when it intersects with the story. For instance, her parents are never mentioned except to say that they blame her for her sister Berget’s disappearance and presumed death and therefore threw her out at sixteen. Oh, and apparently she was adopted, which is mentioned in passing somewhere in the first few pages and then never again in the entire novel.

You know who else blames her for her sister’s death, despite a complete lack of evidence and no body, and therefore has spent the past ten years hounding her, following her every move, and never passing up an opportunity to interfere with her life and career? FBI agent Liam O’Shea, that’s who. Because the FBI has no better use for two agents (O’Shea and his new partner, Martins) than to shadow an ostentatiously law-abiding citizen who was once a person of interest in a long-since-shelved abduction case.

Rylee makes a living “salvaging” (yes, that really is what she calls it) abducted children when law enforcement has given up on them. She is hired by a distraught couple to  locate their daughter India, who was abducted six months earlier in circumstances eerily reminiscent of those in which Rylee’s sister disappeared. Notice how the feds are still looking for Berget after ten years but stopped looking for India after six months? Only one chapter in, we’ve run smack into what will turn out to be a common theme in Priceless: whatever you have deduced or been told about the novel’s characters and setting is subject to change at the drop of a hat for the benefit of a plot twist, a cheap joke or sexy fun times.

The abductions turn out to have been carried out specifically to lure Rylee into the clutches of a coven of witches entranced by a Big Bad Vampire. That explains the similarity between Berget’s disappearance and India’s. What it doesn’t explain is why they didn’t just have Milly bring Rylee over. Yes, it was Milly’s coven—but don’t worry, Milly was an unwitting (at first) and unwilling (later) participant.

All that sexual tension between Rylee and O’Shea is finally resolved when O’Shea moves in with Rylee and… hooks up with Milly, something which the reader only learns (on the final page) when Rylee institutes a “‘No Sex at the House’ rule” because she has “no desire to hear Milly and O’Shea ‘knocking boots’ in the room across from [her]”.

I picked up Priceless because I’ve been reading a lot of UF lately (good UF, mind you: the incomparable Seanan McGuire), it showed up in my Amazon suggestion list, and the premise seemed interesting. I now have a lot less faith in Amazon’s suggestions, and will go back to my usual MO for picking new authors: following the blogs of authors I already like and seeing which other authors they mention or recommend.