So K made curry last night, and I helped out by chopping the veggies, and I chopped an onion and single-clove garlic and a green chili and then washed my hands and sat down in front of the TV, at which point my nose was slightly runny and I wiped it with the back of my hand and OH MY GOD IT BURNS.

Speaking purely hypothetically, I may also, some two or three ineffective hand-scrubbings later, have gone to the bathroom.

The chili was great, by the way, thanks for asking.

I love XKCD. I love this panel. I even bought the T-shirt. 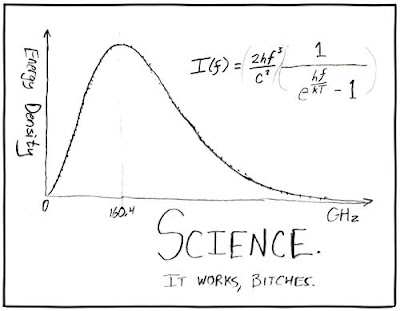 But in all these years, am I really the only one to have noticed that the comic and the T-shirt are wrong? The peak energy density of the cosmic microwave background radiation occurs at 160.2 GHz, not 160.4 GHz as the shirt says.

I just discovered that Amazon allows anyone to “follow” a Kindle user, and there is no way to turn that feature off or to block followers. They say your followers can only see notes that you explicitly make public, but they don’t say anything about whether they can see your book list, which is the union of books you’ve bought, books you’ve reviewed and books on your wish lists—and not just eBooks, but paper books as well. Wish lists can be made private, but the FAQ doesn’t say whether that means they don’t appear in my book list on kindle.amazon.com.

This makes me extremely uncomfortable. END_OF_DOCUMENT_TOKEN_TO_BE_REPLACED

I don’t get Google+.

Much of it looks like a better facebook, with e.g. far better photo
handling and a more nuanced relationship system—where facebook tried to
patch the black-and-white “friend” concept by adding “pages” and
“groups”, Google+ simply generalized it, eliminating the need for such
hacks.

However, I don’t understand why Google+ allows people I have never even
heard of—including people hiding behind pseudonyms and whose identity
even a Google search (hah!) can’t reveal, so much for their
controversial “real name” policy—to push updates into my “Incoming”
stream. I thought the idea was to let me decide who I wanted to
follow, not the other way around.

I almost feel like I’m being stalked, except it’s a weird sort of
reverse stalking where, instead of following me around and poking their
noses into my private life, the stalkers follow me around and grind my
nose into their private lives.

Who the hell are you people?

I stumbled upon the banana argument today. I don’t know whether to laugh or cry. A bit of both, I guess.