After dropping K off at the airport on Friday morning, I decided to drop by Leisha to pick up some tools. She gave me a tour of the new store, then left me to my own devices. I picked up what I needed (plus some stuff I didn’t), paid, and got in the car.

A couple of phone calls and two hours later, money changed hands and I had a replacement starter motor.

Fast forward to Sunday. Having perfected the art of parking on a downhill slope and push-starting, I drive out to K’s mother; I keep all my heavy equipment in her garage. I got the front wheels up on ramps, put blocks behind the rear wheels, spread a couple of old bed sheets on the floor and started laying out the tools I thought I’d need. I’m not always that neat and organized, but I felt inspired. 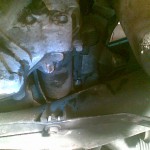 I took a couple of photos, like the one on the left, which shows the starter motor in the center (the big cylinder is the motor itself, the small one is the solenoid), with the gear box to the left, the right downpipe in the upper right corner, and a support beam across the bottom. There’s one shot I didn’t take that I wish I had, though. The car is fairly long (4892 mm plus the tow hitch), and when you’re lying there with your head only a few centimeters below the sump, looking back… It’s like the opening shot from Alien, looking down the length of the Nostromo.

But I digress. The motor is attached to the bell housing by two long bolts; when the motor is in place, they are arranged nearly vertically. It took me about an hour to figure out which parts I needed to remove to get to the starter motor, to disconnect the wires (one little one for the solenoid, one huge motherf***er for the motor; the little one really didn’t want to go), and to unscrew the bottom bolt. It “came quietly”, as they say in cop shows.

Things were going pretty well. At some point, I spoke to K on the phone. I called her or she called me, I don’t remember; it doesn’t matter. I have a Bluetooth earpiece, which means I didn’t have to stop working to talk on the phone (these things are extremely addictive). I told K it wasn’t too bad, that in fact it wasn’t all that different from replacing the alternator, which I did two years ago, although I have a lot more experience now than I did then.

Digressing again! The top bolt is located at about two o’clock on the bell housing (looking forward), and there is about a metric ton of steel and plastic in the way. From the bottom, there is a support beam, the right exhaust downpipe, half the gearbox, and the starter motor itself. From the top, there’s the alarm siren (easily removable), a tie rod, the right cylinder bank, the air filter, the intake hose and sound damper, etc. The nut is toward the front, and you can get to it from underneath, but there’s no room there for a socket wrench; there’s barely room for a box-end wrench to keep it still while turning the bolt. The bolt head is toward the rear, and you can get a socket wrench in there, but only a short one, mostly because of the tie rod, which crosses the plane of the bolt head diagonally. The tight quarters mean you can only turn the wrench about 30° before you have to turn back (or reposition the wrench, if not using a ratchet).

I spent about an hour trying to get the b****rd out, with absolutely no success. I tried everything I could think of to get more leverage, from every possible angle: universal joint, extenders of various lengths, the works. I took a break for dinner, then went back at it. After about five minutes, I got it to move about 15°—then nothing. That was it.

That’s when it struck me.

I had spent more than an hour trying to turn it the wrong way.

I got under the car, put a wrench with a short handle in place, and pushed up. After only a few seconds, it gave, and I got it all the way out with a ratchet.

I wasn’t out of the woods yet. I still had to extricate the starter motor from its nest of beams and pipes and rods and wires, and sneak the new one in. I had an oh-shit moment when the motor wouldn’t come free of the bell housing, and I thought there must be a bolt or screw somewhere that I had missed; but I was just holding it at the wrong angle, so the other end butted against something. Then… remember when I mentioned talking to K on the phone? You see, there was a point to my digression. The point was that I realized there was no way I could get the old starter out, or the new one in… without removing the alternator.

Luckily, I’d been there and done that. Use a 10 mm right-angle hex key with a cheater bar to hold the tensioning damper in place while removing the serpentine belt, remove two bolts—a long one with a nut at the other end, and a shorter one that screws into the engine block—, and finally, disconnect the wires (although they’re long enough that you can lower the alternator to the ground without damaging them). Easier said than done, but not by much.

It was smooth flying from there on out. With the alternator out of the way, I got the old motor out and the new one in in a matter of minutes. The only tricky part was reinstalling the alternator. The short bolt goes through a spacer sleeve a few centimeters in length, which is hard to align properly, especially since you have to do it more or less by touch. Once you have it in place, though, the short bolt functions as a sort of hinge, which makes it fairly easy to align and insert the long bolt. Getting the nut on the other end was a bit of a struggle, though; I had to remove my gloves.

You can tell from the photo on the right that I was wearing protective clothing. I even a spot on the bridge of my nose where the goggles rubbed the skin raw.

Hop in the car, ignition on, starter runs, engine roars. A job well done. Engine off, scrub yourself semi-clean (where the hell is my Fast Orange when I need it?), then clean and stow your tools. That last bit took quite a while; I hate putting dirty tools back in the tool box (or bag), especially those that come in sets with their own box. Back inside, hug mom-in-law, drive home. Arrive exhausted. Hop in the shower, scrub scrub scrub. Go to sleep with the feeling that today, at least, you achieved something.