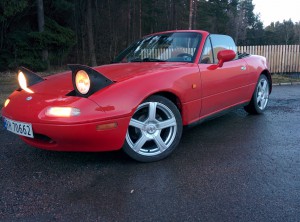 New rims¹ on my little bug-eyed baby, because one of those that came with it was bent (not noticeable to the naked eye—I only found out when I went to have them rebalanced). I also removed the spacers that a previous owner had mounted on the rear wheels. This made a world of difference. The ride is much smoother, and the car now absorbs bumps and potholes firmly instead of crashing over them.

This is basic physics. Spacers increase the mechanical advantage of the wishbone² and necessitate upgraded springs and shocks, whereas this car came fitted with aftermarket shortened springs and adjustable shocks which seem to be set to the firmest setting (I can’t easily check because the adjustment knobs are missing). I also think lateral stability improved a bit, but I’m still not entirely satisfied. However, I’ve already blown over £1,000³ on parts, so new tires will have to wait.

Next project for a rainy day: clean and polish the camshaft cover and replace the leaky gasket.

¹ Martins Image Arctis 7″×16″; it’s hard to find sporty rims in that dimension. I have a set of the relatively rare love-’em-or-hate-’em stock Mazda 14″ “daisy wheel” rims, but they need sanding and respraying, and the hubcaps are missing. I might just PlastiDip them for now and use them for snow tires.

² A double wishbone suspension is not a classical example of lever and fulcrum, because the effort (weight of the car on the wheel) and resistance (spring) are on the same side of the fulcrum (inboard end of the wishbone). However, the principle and the equations are the same.

³ I get most of my parts from the UK, which apparently has a *huge* market for new and used MX-5 parts.

One thought on “Mechanical Advantage”